Tamarit Motorcycles always aims to embrace as many as modern classic bikes and styles as possible, and the versatile and multi-use Triumph Bonneville is the perfect donor bike to develop a several kits or part sets from various styles for our clients. There are not only Café Racer makeovers in our catalogue, but also many other styles such as the urban Brat Style or the daring Dirt Track.

As we mentioned, there are several kinds of Triumph Bonneville kits, and each of them belongs to a certain style that makes all the parts included to have something in common with a project idea, a riding style or just the client's preferences.

The air cooled Triumph Bonnevilles manufactured until 2016 are the bikes for which we have the highest number of parts and combinations possible thanks to the adaptability previously mentioned. Therefore you can combine several cowls with many side ornaments, the options are almost infinite.

One of the options that our clients request the most is the Café Racer style, therefore, this the style that Tamarit Motorcycles have invested a decent amount of time and work in order to develop a full range of parts for it. There are many ways an options where the client can choose without going away from the style. That's why we show you two options for a Bonneville Café Racer kit:

A pure Café Racer kit with our Jarama cowl, the custom Dalúa Side Cover, the re-designed The Son belly pan and our Mr. Kevin nose fairing. This combination of parts that sticks to the Café Racer canon is one of the most requested, specially among those who want a full project performed by Tamarit on their motorcyles.

Another option for a Bonneville Café Racer kit quite popular as well and still inside the Café Racer orbit is the one that has a more urban vision and focused on comfort. This set would include the Tramontana Kit, a 2 in 1 exhaust known as "Bocanegra", the ellegant Guildford side covers and the handy Clubman bar. Meant for a urban and daily use of the Bonneville, this kit is aimed for those who prefer comfort before aesthetics.

Tamarit Motorcycles does not forget about those who stray from the refined aesthetic from the Café Racer and do prefer a bike more agressive and imposing, the Scrambler style. Without being an Scrambler model, we can customise our Triumph Bonneville and put it in "OffRoad" mode, therefore our Triumph Bonneville is ready for any road and situation that could happen. This kit includes our Scrambler seat for two people, the Hummer sump guard made of stainless steel and two parts that clearly stands out : the Grand Bastard front fender and the great exhaust system known as "Papillon". 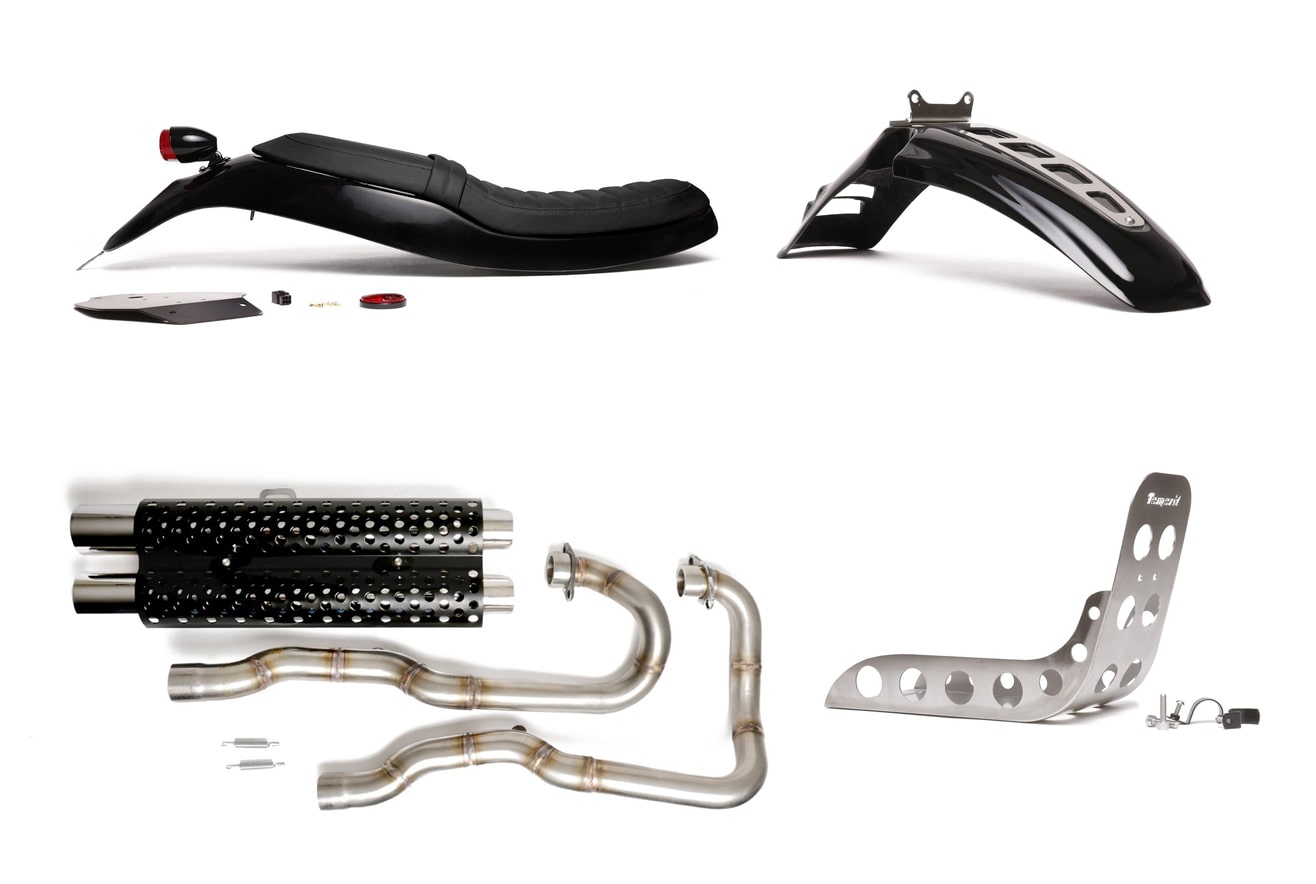 Back in 2016, when Triumph released the new range of liquid cooled bikes, Tamarit Motorcycles doubled-up the efforts in order to get a set of parts for this bike as soon as possible. It was such a boost around the Tamarit workshop that two project were released at the same bike ( a Bonneville T120 ) since we had a ton of parts to build two different kits. This set of parts were released as we say on the double project known as Yunque, where two styles were represented ( the Café Racer and other more urban-styled ) and could be exhanged from one style to another in just a matter of minutes. On one project, the Café Racer seat Jerez clearly steals the show along the new Tamarit Belly Pan, the other version comes with a sport seat for two people known as "Ibiza" and a more aggresive part such as the new sump guard for the T120 made in stainless steel as always. 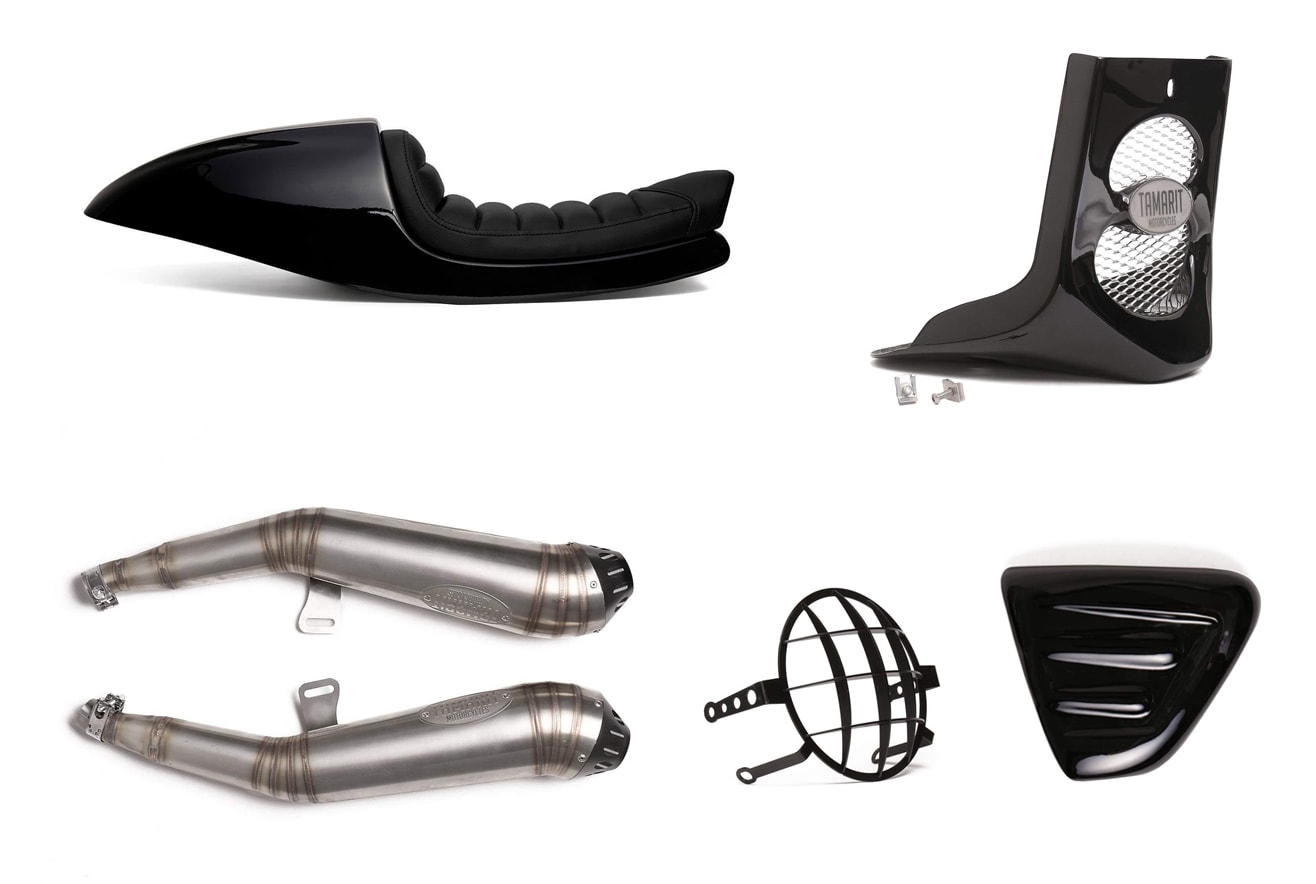 As a conclusion, these kits change dramatically the looks of your Triumph Bonneville Motorcycle, and very often these changes can be made just by a few wrench turns, since the Tamarit parts are always very easy to install and ready to be installed by the client himself.