The best tires for your Dirt Track

Among the classic styles of motorcycles that have re-emerged in the last decade, the Dirt Track has been reinforced by the presence of championships that have managed to enhance the appearance of new fans of this discipline. But not only has it been reflected in this sense, but the style of motorcycles used in these races has adapted to urban life and more and more people are daring to modify their motorcycles to show off a Dirt Track transformation.

To achieve this aesthetics closer to the competition one, it is very important to use Dirt Track tires.

From Tamarit Motorcycles we are dedicated to creating totally exclusive modern classics motorcycles projects for our clients and there is nothing we like more than innovating with new styles. This is the case of the Dirt Track motorcycle, which is still difficult to see on Spanish roads but is increasingly visited by fans of classic competition motorcycles. During the transformation process, the creation of new parts and accessories has been carried out to perfectly fit this aesthetic trend and make the motorcycle look 100% Dirt Track.

Despite being motorcycles with an appearance closer to the competition ones, they will not be used for it, so it is essential that the parts included in the build are homologated and adapted to ride around the city. For this reason, in most of our projects, we have chosen to include mixed tires from the Mitas brand. Mixed Dirt Track tires are the most practical option if they are going to be used regularly on asphalt and, in addition, you can find a great variety within the range. We have the Mitas E07, designed both for use on roads and to experiment off-road. Another tire used in the transformations of this discipline, are the Continental TKC80, which, thanks to their lugs, provide great stability and lateral grip, at the same time that they make the most off-road side of these motorcycles shine.

This discipline of American origin kicks off at the beginning of the 20th century, with races on stilted wooden ovals. In Spain, this discipline has evolved to major competitions: the RFME Spanish Flat Track Cup, Rodi Dirt Track Cup, Superprestigio Dirt Track, etc. 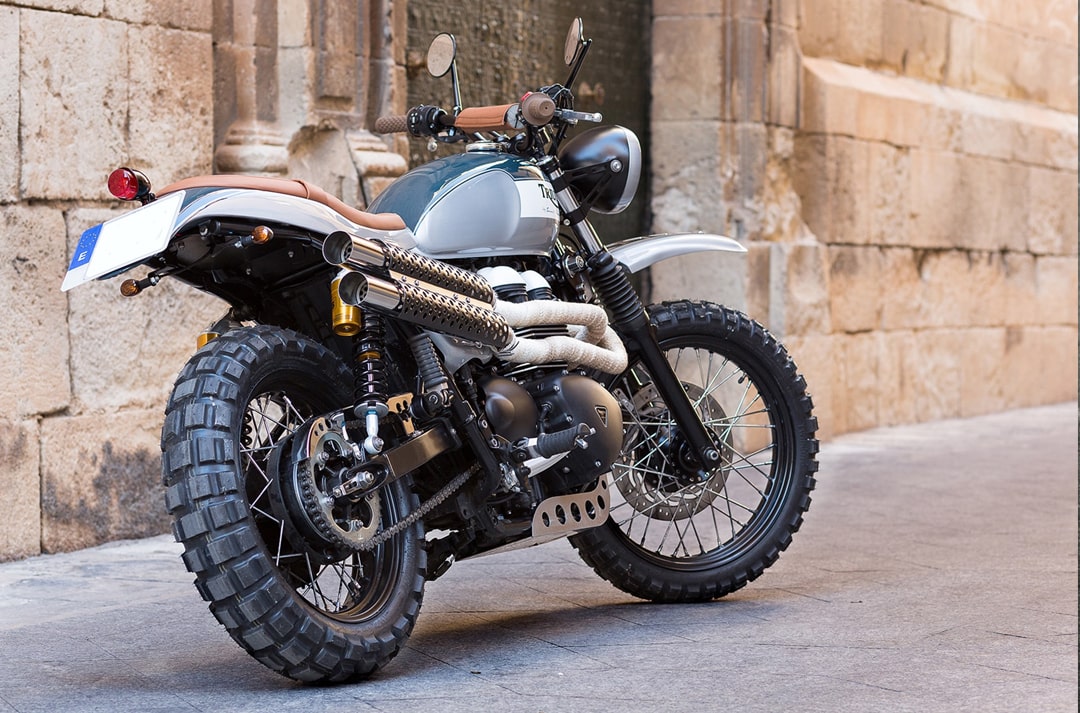 As a notable difference, we can highlight in the case of the Spanish Cup, 19" that rims are used for the tour of quarter-mile ovals and in TT mode. This event is ruled by American parameters, where the Dunlop DT3 are the official Dirt Track wheels of the competition. Instead, the Rodi Cup takes place in smaller ovals and where the size of the tires drop to 17", measures that were also the same in the Dirt Track Superprestigio of Barcelona. Currently, the Super Prestige Championship, famous for the intervention of MotoGP stars like Marc Márquez, is no longer taking place in the national territory, but has been transferred to the neighboring country, France.