Triumph seats are one of the most important parts of the bike, especially speaking in terms of comfort for the rider and aesthetics, since the appearance of the motorcycle can change radically depending on the style of seat chosen. Triumph Motorcycles, because of their construction, are motorcycles whose anchors allow rapid change from one seat to another. In most cases, it is enough to adjust a couple of nuts with the tools we have at home, and even in other cases, which we will now see, simply turning the ignition key in the right place is enough.

At Tamarit Motorcycles, the design and production of different seats for each motorcycle has been constant since the beginning of the brand. As Triumph has been launching new motorcycle models, Tamarit has had to go behind each one of them to be able to offer all neoclassical users its exclusive custom seat. That is why each model or family of motorcycles has its exclusive design, all similar but with differences that make each one unique, instead of making a simple cover for all and later adapting the base to each of the motorcycles.

That is why each family of motorcycles has its seats to be able to customize the motorcycle according to the style you want. You can make a quick change from a two-seater seat to an elegant single-seater café racer cowl, or completely transform the cowl of your motorcycle with one of our kits that will give a totally exclusive look to the motorcycle at its rear.

Our Triumph seats are made of resistant fiberglass and sanded by hand, so they can be delivered unpainted or painted in the official color of the Triumph motorcycle that the client has. Also, in the case of the cowls, these incorporate a recess in the lower part of the seat in such a way that the customer can store small tools or documentation.

The padding itself is made of polyurethane, which provides the perfect balance between durability and comfort, being resistant to inclement weather (thanks to its nautical fabric lining) and allows the pilot to ride perfectly both in short and medium distances.

Another main part of Tamarit seats is the front flap made of steel. This is an element common to all Tamarit seats, which incorporate this flap or tab on the front that makes contact with the lower part of the motorcycle's tank. This contact causes the seat to lock and move as little as possible ensuring its hitch.

Because of the hand-assembled parts of the seat and that not all Triumphs in the world are made the same, in many cases there are certain millimeter variations, which cause this flap not to make contact and not to close completely as desired. This is why a rubber tape is now included in the orders which the customer can apply to the steel flap, in order to reduce the slack and movements of the cowl by reliably thickening the flap. 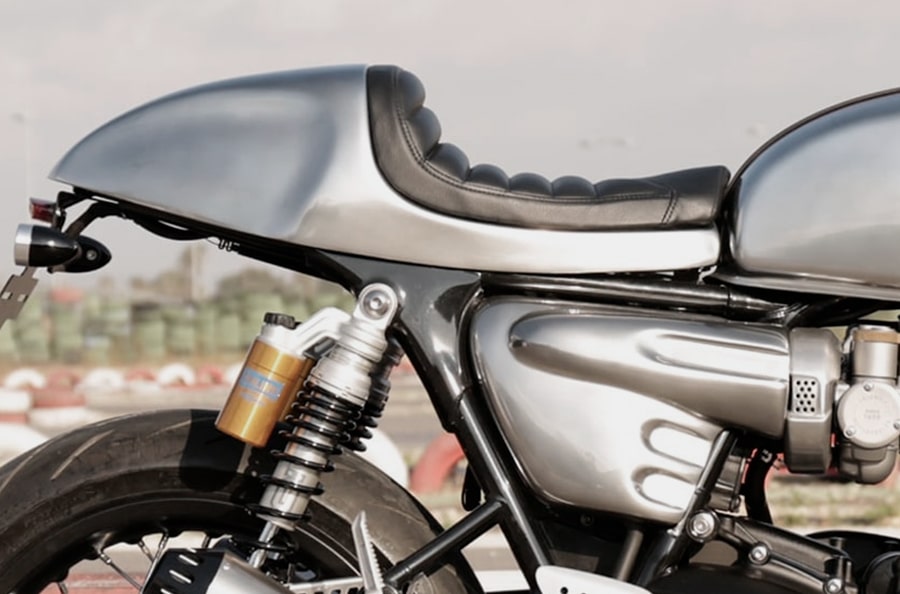 The Thruxton R “Monaco” seat is a must of today's Café Racer transformations, the sporty model of the neoclassical range. Its aggressive curves and grooves added personality to the bike and its unique style is unmistakable to any member of the classic motorcycle community. Without a doubt, the most well known seat of Tamarit. As a curious note, the Monaco seat, due to its construction, had to be modified after a while since it was found that depending on what area of ​​the world the Triumph was made, it had different chassis support measures. The Monaco seat could perfectly fit in a Thruxton R in Tokyo, but not fit in any way in other made in Birmingham.

The Monaco Seat caused a great impact on the classic motorcycle community when it was installed in the BABIECA and SOMBRA projects, which were published in such prestigious media as Pipeburn or BikeExif. 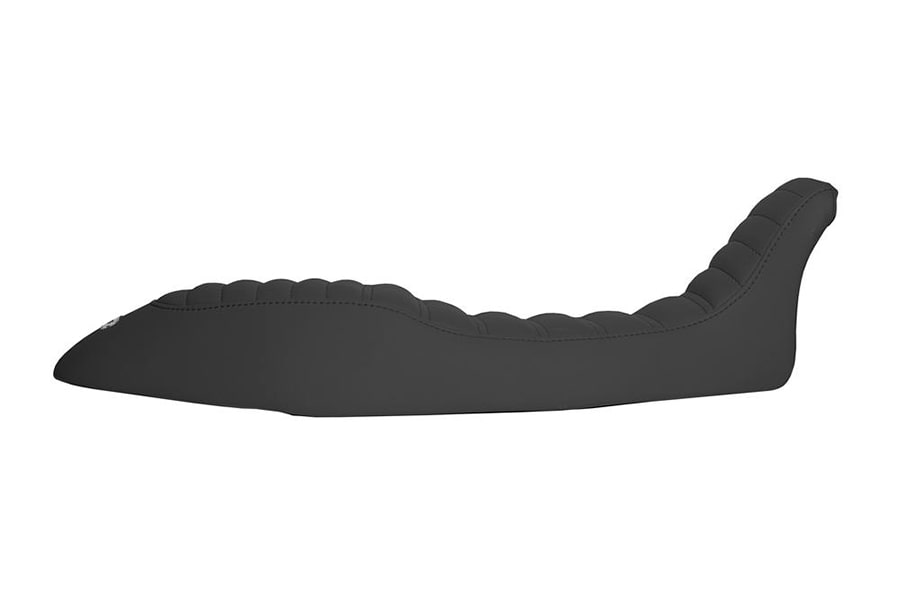 The Monza is Tamarit's new bet for the Thruxton 1200 and Thruxton 1200 R Triumph seats in its new line of one-piece upholstered seats. It has the same installation as the Monaco, with the exception that to achieve that flat and slim look, it is necessary to cut the side hooks from the motorcycle chassis.

The first Monza was released in the summer of 2020 through the Triumph Thruxton R known as SATURNO, which was carried out during the quarantine season due to the Covid-19 pandemic. 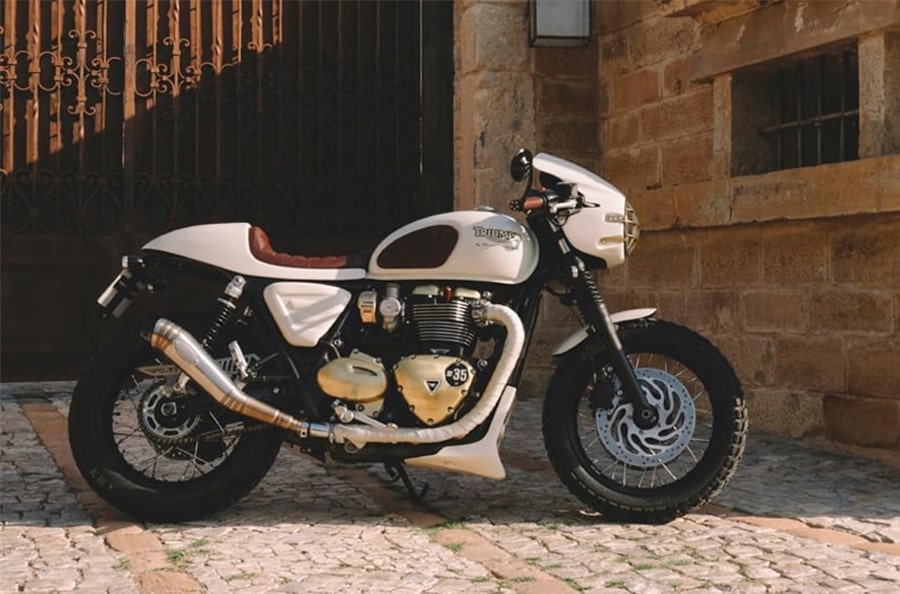 The Jerez seat was the novelty of Tamarit Motorcycles when Triumph's neoclassical generation was totally revamped and the new T100, T120 and Street Twin were brought onto the market. With smoother and more sophisticated lines than the Monaco, the Jerez is the single-seat Café Racer solution for your next-generation liquid-cooled motorcycle. With Tamarit's instant release system, this seat can be painted in any color of the original Triumph range to perfectly match your motorcycle's customization.

The Jerez seat was part of a double project known as “Yunque”, which was the perfect culmination for the release of the entire range of Triumph liquid-cooled new generation parts, among which were the Tamarit belly pan and Muralla side covers. 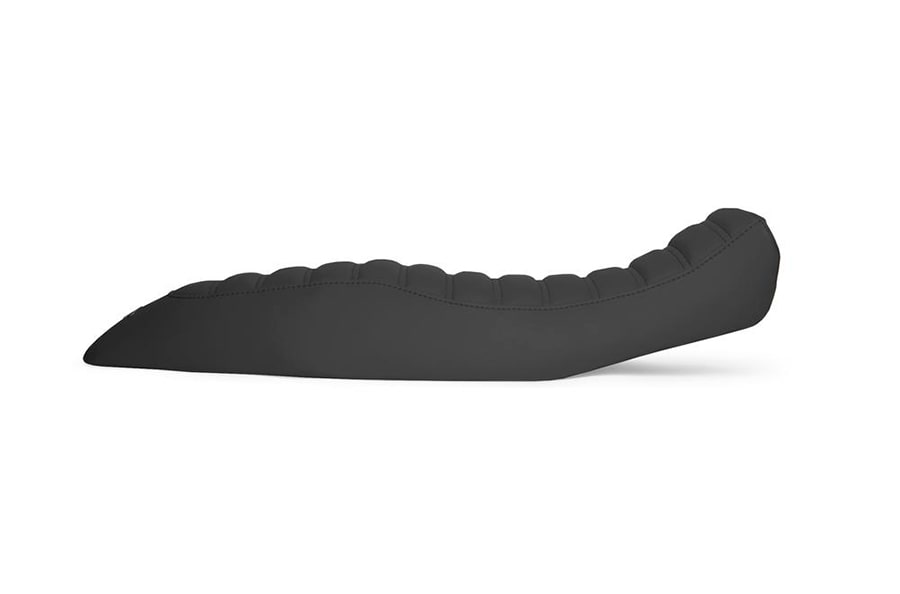 Among the new Triumph seats, Silverstone is the new Tamarit launch in the form of a polyvalent cowl for different liquid-cooled Triumph Modern Classic models. This seat is valid for both the Bonneville and the Street Twin, but also valid for the Street Scrambler range (as long as you change the seat lock and place it at the rear).

On the market for many years and one of the best in terms of style and quality when it comes to air-cooled motorcycle seats. The Jarama seat has been redesigned and endowed with more personal and attractive lines. Being constantly evolving and improving, the Tamarit team has also redesigned the upholstery with a more modern and sophisticated character. Like its previous version, this fiberglass seat is valid for all air-cooled old generation motorcycles: the Thruxton Carb, Thruxton Efi, Bonneville 865, Bonneville T100 and Scrambler manufactured until 2016.

One of our favorite projects of the year, the beautiful Bonneville SE "LeMans", was the first project to include the new version of the Jarama, adding to the transformation as a whole noteworthy addition. 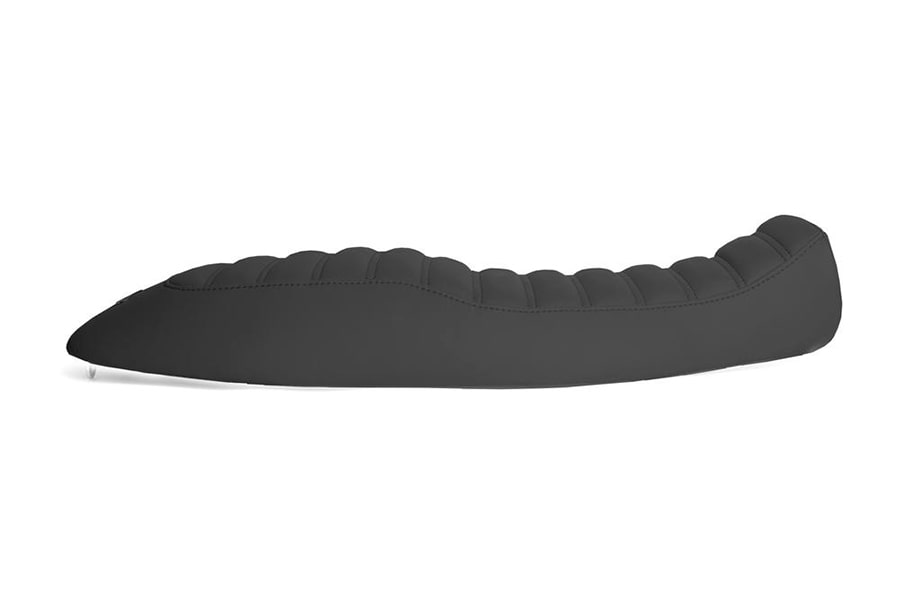 The “LeMans” seat is the one-piece lined version for all air-cooled motorcycles. One of the most stylish Triumph seats of a square and a half, available in 4 colors: black, dark brown, camel and burgundy.

One of the projects published during covid-19 was the first to include the LeMans seat. The beautiful CAPTAIN included a unit of this seat in black, which combines perfectly with the rest of the silver, red and blue tones of the motorcycle.

The new Triumph Speed ​​Twin has quickly become a sales benchmark in the field of neoclassical motorcycles and among potential Triumph consumers. The Mugello seat is Tamarit's versatile design for this new hybrid, between the Thruxton sports range and the economical Street. Released at the end of summer 2020 with our project "Dreams".

In the same way that the Monaco was a hit in its category a few years ago, the Suzuka seat is called to be the new boom of the new generation. Taking advantage of the popularity of the Speed ​​Twin, Tamarit has created an exclusively designed cowl, which gives the bike a more sporty and compact character thanks to its lines. Soon available in all the colors of the Speed ​​Twin and delivered anywhere in the world in the different colors of the Triumph range, ranging from the classic Silver Ice (present since the launch of the liquid cooling range in 2016) to the more modern shades like the Matt Iron Stone or the matt gray Storm Gray.

The kits are a set of parts that includes all the necessary elements to modify the rear of the motorcycle. These include a bar to shorten the tail of the bike and give it a more compact look so that the wheel protrudes slightly below the chassis. To install it you will need to take the motorcycle to a specialized workshop or have extensive knowledge of mechanics, cutting, welding and electronics to be able to correctly secure everything.

On the other hand, our exclusive motorcycle projects often include Triumph seats that are not marketed. The reason for this is because these triumph seats are created in situ at our workshop on the motorcycle in question that is being worked on, therefore these seats have a totally handmade character. They cannot be marketed as the bike is physically needed in the Tamarit workshop for further transformation, beyond a few quick-fit parts.

The Tramontana Kit was the first of these characteristics to be launched on the market. Due to the great response it had on our Titan project, Tamarit Motorcycles decided to go against their usual “Plug and Play” line and sell a part in which it is necessary for the motorcycle to go through the workshop for installation. This kit includes the license plate holder, the tail light, the nautical leather seat and the necessary bar to finish the chassis in a U-shape to suit the client.

The Himalaya Kit is the replica of the Tramontana but in its new generation version, especially suitable for Street Scrambler. These kits allow the seat to remain double, but without the rear part being so bulky, especially recommended for comfortable and urban motorcycles, to take every day and within what we consider the Brat Style style, which puts comfort first above any other aesthetic requirement.

The Bizarra Kit is designed for all new generation motorcycles except the Thruxton and the Speed ​​Twin. This kit allows the motorcycle to be shortened to suit the customer and a shorter seat of one and a half square. In the same way that the Tramontana came out at popular request, thanks to the Bizarra and Black Pearl projects, this seat was produced and put on sale to the public by popular request.

They can be seen in several exclusive Tamarit projects, but these are only possible to achieve if you bring the motorcycle to the Tamarit workshop for a thorough transformation. The most popular Triumph seats that have captivated thousands across the globe are, for example, those featured in the Stalker, D. Franklin or Speedster projects. These seats are literally manufactured by hand in our workshop, sculpted and sanded little by little to meet the specific demands of our client and then finally upholstered by our partner workshops.

Unlike the rest of the pieces, which in most cases are perfectly suitable with the original seats according to the situation required, these seats are totally fixed and sealed to the motorcycle as they are totally made to measure. Said seats have to incorporate a complementary homologation project to be able to circulate with guarantees on the roads of the European Union.