Dirt Track is a form of speed racing that takes place on an oval-shaped circuit and in which we find a course of banked curves. This discipline is disputed in an anti-clockwise direction and runs through elimination rounds. Due to their strong competitive nature, the bikes are designed with the aim of achieving the most aerodynamic aesthetics possible. in order to adapt a posture that allows them to gain speed and stability during the ride.

The aesthetics of Dirt Track or Flat Track motorcycles is characterized by a minimalist style that tries to highlight its off-road side within the competition styles, an example of this is the style of the Dirt Track cowl adapted to the seat.

Within the aesthetics of the Dirt Track motorcycle category, the cowl, is that part located just behind the seat that is made of fiber, metal or another type of material; and that serves to give the motorcycle a more aerodynamic and sporty silhouette. 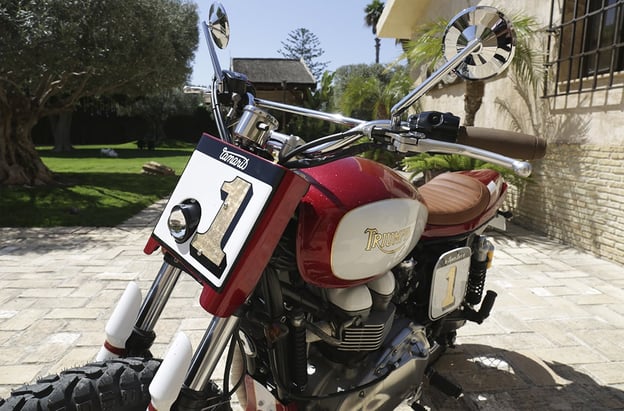 When purchasing the Dirt Track seat, you can choose to only buy the cowl or buy a seat that already has the cowl attached; In addition there is also the option to buy a removable cowls that covers the end of the seat. This last alternative will allow you to go from a two-seater to a single-seater in a few minutes and without having to homologate this modification, since it could be withdrawn for the ITV.

As a consequence, the cowl will shorten the seat by occupying the rear and will give the bike that sportier aesthetic concept. As it is a motorcycle designed for racing, its aesthetics are more minimalist and it lacks accessories that can hinder the handling of the motorcycle while riding. In addition, due to this concept of competition, the seat has not been designed to carry a passenger, but instead opts for a single-seater that is more comfortable for the pilot.

In the event that the cowl is not already integrated in the seat, the Dirt Track seat covers hide the part that should occupy the section that the passenger would use. In other cases, the seat directly replaces that part, modifying the seat to make it a single-seat. This small change will make this type of modern classic motorcycle give you the Triumph experience stand out with a more sporty and aerodynamic design.