The Scrambler style can be perfectly applied to any base in the Modern Classics range of the British brand Triumph, although it is true that there are more "ready" models than others. The success of this style has meant that the brand itself has produced a series of models that carry the Scrambler concept from the ground up.

The Triumph Scrambler Custom are perfect for those looking for a versatile motorcycle that can adapt to any type of terrain, without losing the essence of classic motorcycles: exclusivity, elegance and comfort.

At the end of the 60s, the Scrambler bike was born in England, which sought to get the most out of motorcycles on any surface. This off-road concept applied to motorcycles was the one that led to the modification, to adapt them to dirt terrains more typical of rural terrain. The most representative features are a longer suspension travel than road motorcycles, and block or mixed tires to reduce the impact of potholes. And for the same reason, a wider handlebar and a high exhaust were also included, to prevent them from being hit or damaged by the difficulties of the terrain. They are also identified by having a long flat seat that facilitates mobility in search of better traction.

As we have commented before, the Triumph motorcycles brand has released a Scrambler range that facilitates the transformations of this style, since they have been designed with this concept in mind from the beginning, making them perfect in terms of parts compatibility. Still, great results can be achieved on any model of the Modern Classics of Triumph bikes.

This Triumph Street Scrambler Custom project that we carried out at Tamarit Motorcycles was based on one of the new generation motorcycles that we had not yet had in the workshop, so it was the perfect time to continue developing details that would improve the final appearance of this current aesthetic. 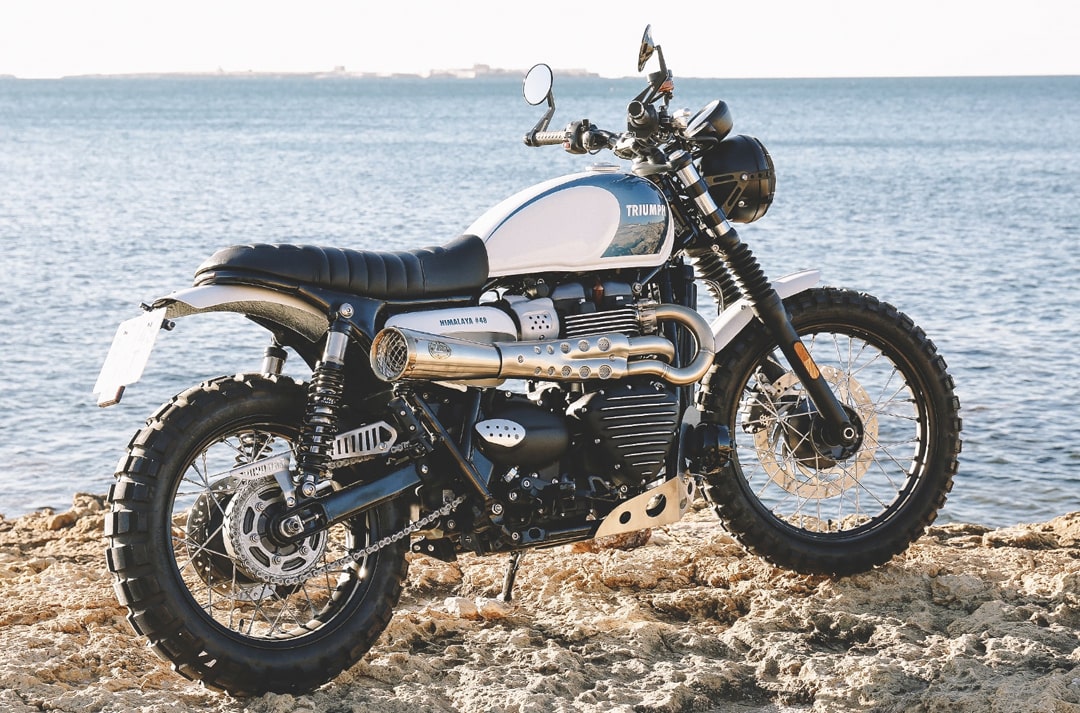 As always, our Street scrambler build project started after the interview with the client about the details of his Scrambler transformation. One of the premises was that the seat should be integrated into the gas tank, so a seat that was wider at the front to hug the tank and very narrow at the rear was included. Another of the most notable elements was the skid plate - since there were no standard parts for this type of anchor, we had to make them to measure so that the union between all the elements worked perfectly.

We gave it a much more personal detail with the inclusion of the Dirt Track-type side cover, with a square shape fully customizable to suit the client and adapted for this style of motorcycle.

Known by the Husky name, the Scrambler stands out in the Tamarit garage for its pure '70s styling as a tribute to Steve McQueen's iconic Husqvarna, with the black engine and chrome wheels. For its configuration, some rear and front fenders were made in aluminum, along with some high exhausts that completed the Scrambler philosophy. And as the main protagonists, we highlight the yellow race numbers and the tank in a bright red color with aluminum and white details. 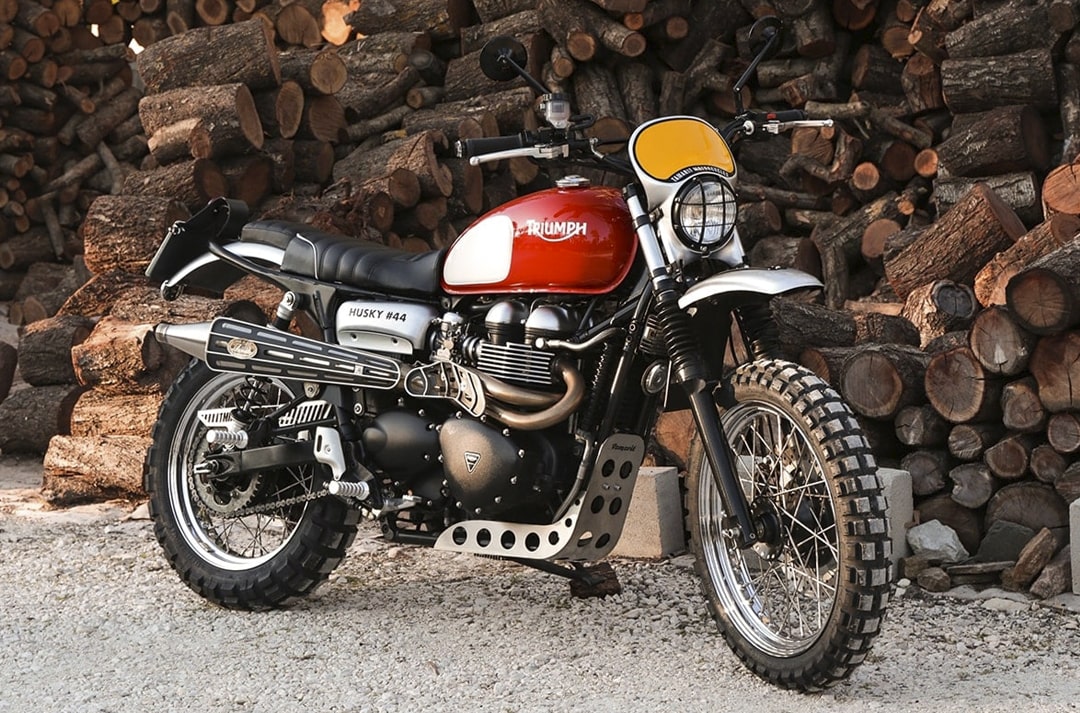 The front of this Triumph Scrambler custom also stands out for the personality provided by the classic cross front inserted into the grille headlight. It should also be noted the exhaust system, shock absorbers, cross-type handlebars and tires; together they complete the figure that is so characteristic of this style of motorcycle.

The idea of creating the Niza Scrambler motorcycle came from the hand of one of our clients who, despite having the initial idea that his motorcycle was going to be dark or practically black. After some meetings and sketches, the final result has little to do with the original idea. This bike has very defined lines and the Scrambler character is very clear in all of the accessories. 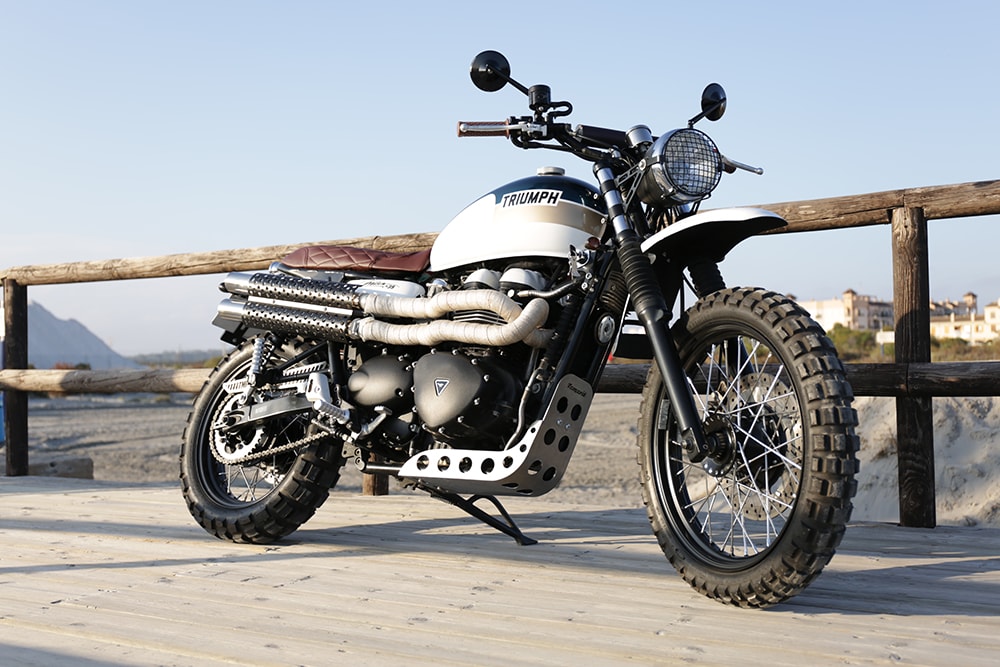 The front part is modified thanks to the new tires, fenders, handlebars, headlight support and the front grille. On the other hand, the rear is completely eclipsed by the exhausts, a classic of our transformations belonging to this style. The sides of the Triumph Scrambler custom have also been built thanks to the custom covers to suit our client. The only piece that falls outside the lines of this style is the inclusion of a new rear seat pack, the Tramontana.